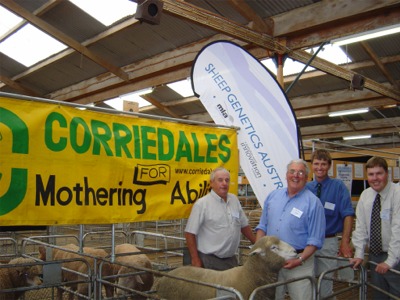 SGA, through the cooperation of MLA and AWI, brings together the information of 1.2 million terminal breed sheep and 350,000 maternal sheep from the LAMBPLAN database, with that of over 1 million Merinos from Merino Genetic Services. Information from these animals is used to calculate Australian Sheep Breeding Values (ASBVs) for over 70 traits to help breeders determine which animals have the required genes that will help them improve their production.

The database was designed for ram breeders and commercial producers to compare the genetic potential of rams and ewes for a range of industry agreed traits, across flocks, independent of the environment and location.

Information for the database is supplied either directly by the breeder or through a Service Provider. The breeder decides which traits are relevant to their production system, which measurements to take, how much information to put in and retains direct ownership of their studs data. The collection of data is subject to Quality Assurance procedures to ensure its accuracy and credibility, and as a guide on how to select and measure different traits to maximize the accuracy of the breeding value.

There are two types of breeding values that can be calculated. ASBVs are the most accurate breeding values and are used to compare sheep within the same breed group and across flocks. These will be reported with an accompanying trait accuracy value, and will be presented in much the same way as the breeding values and accuracies in a BREEDPLAN beef cattle catalogue. In the Merino industry, studs with these ASBVs will be identified by a MERINOSELECT ASBV logo, while in terminal, maternal and dual purpose breeds participating studs will be identified by a LAMBPLAN ASBV logo.

The second type of breeding value that can be calculated is known as a Flock Breeding Value (FBV). These are calculated as estimates of performance within a particular flock or management group and are not used for across flock comparison. They can be used in studs which have no link sires to other studs or where the accuracy of the calculation is low. Accuracy estimates will not be reported with FBVs.

The launch of SGA gives Corriedale breeders a new opportunity to assess the role of performance recording within their studs and within the breed. With the involvement of Merino breeders in the database and being taught how to speak the language of ASBVs, it has the potential to broaden the client base for Corriedale rams. There will be more information about SGA, including costs and benefits, in the next newsletter.