There was much laughter and fun as the teenagers gathered for the 2007 Corriedale Junior Judging competition. Two sets of four sheep were brought to the arena and as the time neared to 10.00am the grandstand began to swell in numbers. There were 150 entries this year and the school staff assisted with gathering students and helping to run the competition. Before judging Vic Walter explained what to look for in a Corriedale and how to go about positioning yourself to judge each animal. The over judges were Geof Risbey, Vic Walter, Amy Cosby and Leigh Ellis.
Bruce Hamlin is to be congratulated in organizing this event each year and he always acknowledges his team, Bron Ellis, Judith Nicolson and Brenda Venters.
Thank-you to all the students and their teachers who attended. A good morning was enjoyed by all. 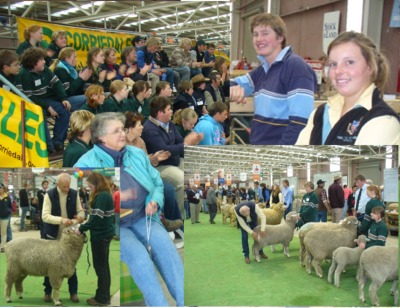